"I can remember as though it was yesterday when I got my initial shipment of Stokowski's early electric discs. Suddenly, we were hearing real basses, the rich vibrant tone of the cellos and the double basses. But there was something else, an over-all resonance around and about the orchestra that had never been heard in a record before. It was labelled by the recording engineers as 'room-resonance'. Immediately, I influenced Parlophone to build a large studio to obtain this desired effect which enhanced those discs from America.

In time, recording engineers came from America and taught our men the new system, and then in time our engineers made advancements on what they learned. How well I recall our colleagues' attitude when I played for them those early electric records from America; they still persisted that recording was not to be taken seriously, that Stokowski, myself and others like us were wasting our time.

"But there were a few prominent men who shared my enthusiasm. By 1921, the noted Wagnerian conductor, Karl Muck, saw the value of recording. And long before electric reproduction came into existence, an elder colleague of mine, the eminent pianist, teacher and conductor, Eduard Moerike, had joined ranks with me to make a series of orchestra recordings, and when the new electric discs came into being he was as eager and anxious as I to make new ones. There are those of us today that still highly value his electric versions - made before the year of his untimely death in 1929 at the age of 52 -of Smetana's tone poem The Moldau and the overture from The Bartered Bride as well as other selections. When I was busily engaged in waxing the nine  Beethoven symphonies in the early 'Twenties', Moerike was also busily engaged in recording the Strauss tone poems and symphonies. He did them all. The only recording until recently of Strauss' Alpine Symphony and the only complete Aus Italien were by him. He also recoded Strauss' early tone poem, Macbeth, one of the composer's best scores - a work I admire so much I hope someday to record it myself. In my estimation, it is an unjustly neglected composition; far ahead of the composer's Also spake Zarathustra."

Dr. Weissmann was born at Langen, Southern Germany, of a Finnish father and a German mother. From the former he inherits his intense blue eyes and his light brown hair. Like many other musicians, his family intended him to follow a business career and accordingly he studied law at the University of Munich, where he acquired a degree as Doctor of Philosophy.

"But, I also studied music," he told us. "And, I knew, even when I got my degree that I was going to make music my career." After five years at the state opera in Berlin (1920-1925), he was appointed musical director at the opera houses at Muenster and Knoigsberg. "There, I was able to repay my friend and teacher, Max von Schillings," he said, "under whom I had studied at Munich and Heidelberg. It is to him that I owe my success, for it was he that obtained for me the conductorial post at the Berlin State Opera. He supervised my career and I think on him always as a second father. At Konigsberg, I decided to revive interest in his opera Mona Lisa. Obtaining the singers Michael Bohnen and Barbara Kemp, I prepared the opera for production, and then invited my good friend von Schillings to conduct the performance. The revival was a huge success and von Schillings was deeply grateful. Bohnen and Kemp were hailed for their portrayals of the leading roles. This led some years later to their singing the parts in the presentation of this opera at the Metropolitan.

"Meantime, the success of Mona Lisa prompted me to prepare a performance of Der Rosenkavalier and to invite Strauss to officiate as conductor. Later, I prepared a performance of Pfitzner's Palestrina and had the composer again as the conductor for the occasion. Palestrina is an unjustly neglected score, and - I believe - a misunderstood one. It is a product of the German philosophy of meditation, a brooding mixture of pessimism and of life. It is not an opera of the verisi mo (realistic) school, but rather a product of a dream-world - one that Schoppenhauer might have created. Those interested to know his music should look up the Preludes of Acts I, II and III, which Pfitzner recorded some years ago for Polydor (discs 95459/61). As preludes, they utilize some of the essence of the succeeding drama. They are in their way miniature tone poems, like the overtures to Weber's operas and the several that Beethoven wrote for his one opera, Fidelio. There is in them a similarity to the preludes to Act II of Tristan and Act II of Die Meistersinger. The philosophy of meditation, of which I have spoken, is well expressed in these excerpts." 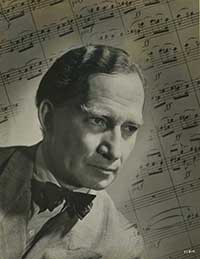