We asked Dr. Weissmann to tel lus about the artist who stood out most vividly in his memory. Unhesitantly he answered:

“The soprano, Meta Seinemeyer, occupies a special niche in my memory. We were friends for many years, and I coached her in so many roles and assisted her in her meteoric climb to the top. She was a female Caruso, blessed with an opulent voice of unusual warmt hand beauty. She sang German and Italian opera equally well, and she also had a fine feeling for lieder. Before her tragic death in 1929, we had signed her to make for Parlophone and Odeon forty record sides a year for a long period of time, a contract which no one els had been give up tot hat period.”

Record collectors who know the voice of Meta Seinemeyer will agree with Dr. Weissmann on the extraordinary quality of her voice. The writer once heard her as Eva and the memory of her beautiful singing is still fresh. She had hardly achieved a decade of her career before her untimely death occurred. In 1929, she came to Covent Garden in London for the first time and was hailed by the critics. The late Herman Klein wrote: “Versatility is evidently among the virtues posessed by this clever German soprano, in addition to the beauty of her voice in the interpretation of Wagner that has distinguished her recent work at Covent Garden .” Speaking of her Tosca, he said: “In Vissi d’arte she came near to the ideal established by the illustrious Milka Ternina, who created this role in London. Would that every would-be imitator of that great artist were so succesful as Meta Seinemeyer. The touching quality of her plaintive approach is really exquisite; her breath-control and vocal technique generally, beyond praise.”

To return to Dr. Weissmann and his memories, which he contends are not as fresh as he would like them to be. “One would have had to have kept a recording log, day by day, to do justice to everyone. But as I think of artists and we mention them much returns to me. I remember, for example, the first recording session I had with Melchior. We were doing some excerpts from Parsifal. But I had the feeling that he should be recording the love music from Die Walkuere, because he was filled with a mysterious elation and ardour. After several sessions, when we had got to know each other better, he suddenly took out a picture from his wallet and showed me the likeness of a very pretty young woman whom he had just married in Munich, and he told me alla bout his landing from a parachute in her garden and of the subsequent romance. Later, we all came to know ‘Kleinchen’, as we called her, his most attractive wife. 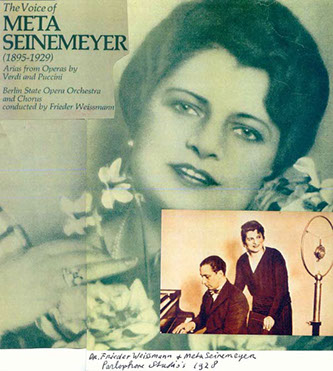