Dr. Weissmann began his recording career in the latter part of the acoustic era (1921) with the Parlophone Company, then a small organization which was, however, destined in a relatively short time to become one of the largest and most powerful concerns in Germany. It was linked with the Odeon company, and the two formed a famous combine in their day. At the time he began his first recording work, Dr. Weissmann was an assistant conductor at the Berlin State Opera.

"It all started," he told us, "with the noted soprano, Emmy Bettendorf, signing a contract to make some records. Her first was to be 'Senta's Ballad' from The Flying Dutchman. I had coached and prepared her for the role at the opera, and she desired me to conduct the orchestra for her first recording. We had only a small room in which to function and a not too large a horn. The situation looked rather hopeless, but I set about to make the best of things and to provide as near a semblance of a well-sounding orchestral accompaniment for a fine singer as was feasible. I made many tests for placing the orchestra, which was a small ensemble of twenty-five pieces.  We never used more than thirty pieces in those days even for my early symphonic recordings. Wagner would perhaps have shouted 'sacrilegious',

but I think he would have sanctioned the venture none the less. He would have seen the value in having his music in reproduction. The low strings, in those days, did not record so we used bass tubas in their place. These are the instruments that give out the growls in the background of so many acoustic discs.

"Considering the limitations with which we dealt, it was remarkable the results we obtained. I can recall an acoustic recording we made of the 'Quintet' from Die Meistersinger, a most ambitious effort for its time.  The singers included Emmy Bittendorf; the Swedish tenor, Carl Martin Oehmann; the splendid baritone, Michael Bohnen; and the well-known contralto, Karen Branzell. The artists assembled around a horn a trifle larger than the ring one can make with one's arms, and with their arms about each others necks they sang as best they could. That disc in its day made recording history -in Germany, at least. Despite the shortcomings of orchestral records, there was a demand for them, so I was asked to undertake the waxing of some symphonies. I had already made many overtures and various orchestral excerpts from operas which were selling very well indeed. I did all nine of Beethoven's symphonies with the exception of the finale of the last; a chorus, singers and orchestra could not be assembled before a horn, and furthermore I doubt that that little room in which we worked would have held such a crowd. We barely had space enough to move around as it was when we had the 30-piece ensemble in it."

A lot of Dr. Weissmann's phonographic work is buried in the fields of forgotten discs. "It is perhaps just as well," he says, "that the early experimental work of the pioneer does not survive. In the field of recorded music its artistic values are controversial. The acoustic recordings, for example, of Artur Nikisch do not represent this great conductor as I and other musicians remember him. Today, we make recordings that are realistic in sound, a better 'photograph' of the conductor's artistry than those we made in the early days. The conductor for many years, even after the electric reproduction began, was associated by the greater majority of people with singers; on his own, he hardly occupied in their minds a position commensurate to his talents. As the art of reproduction advanced, things gradually changed and the conductor slowly but surely came into his own. I never doubted that he would, even in the acoustic days."

Of the radical change that electrical reproduction made in the recording studio, and the part that he played in advancing conditions in Germany, Dr. Weissmann spoke with great enthusiasm. 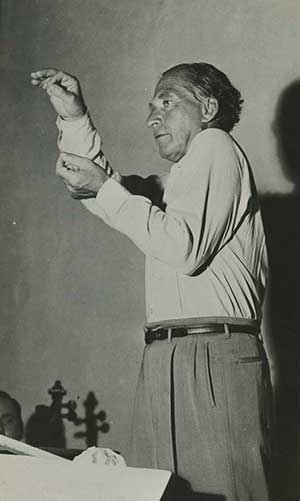